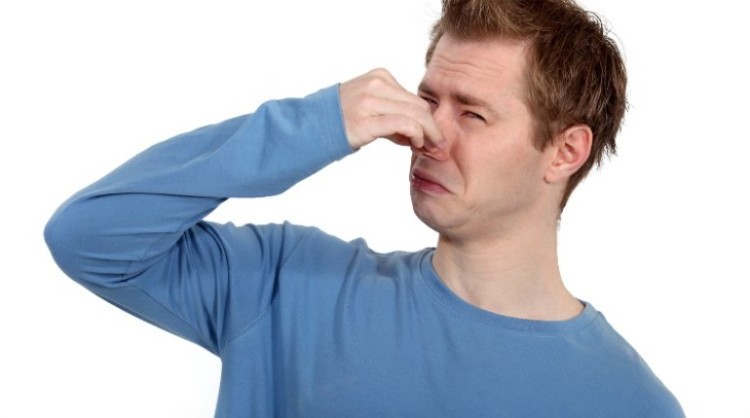 Ever settle into the restroom to do your business and, amid the calming sound of your yellow stream, notice an awful smell? You know what your pee should smell like — you experience it anywhere from six to eight times a day — so an unfamiliar scent might be a sign that something is awry; a warning message flowing from your body to the toilet.
Or it could just be something you ate. It turns out there are lots of things that affect the smell of your pee. How dehydrated you are can not only change its color

, but also create a much more pungent smell, as can dietary choices and medical conditions. Here are the biggest culprits of why you’re stinking up the toilet bowl. If you notice it’s a common occurrence, definitely see your doctor. And in the meantime, invest in somePoo-Pourri.

Drinking too much coffee

If there is such a thing, that is. Overconsumption of coffee not only makes you wired; it could make your urine smell like a venti latte. Coffee contains caffeol, the fragrant oil you smell after it’s brewed, which you smell again when you pee it out, especially if you’ve downed a lot of it.

Coffee is also a diuretic, which doesn’t help things. “Too much coffee will make your urine concentrated, and hence will impart a foul odor to your urine,” internist Dr. Aditi Gupta says. That’s also why your pee becomes dark and bad-smelling, she adds, because as your body gets dehydrated from drinking too much coffee, the bacteria become more concentrated in your waste. No matter how funky your mid-morning pee smells, coffee is totally worth it

“Breaking the seal” isn’t a thing

, but drinking alcohol definitely makes you have to pee more. That’s because, like coffee, alcohol is a diuretic that makes the bacteria in urine more concentrated as you pee more and become dehydrated. It also has its own odor profile that creates that familiar beer-pee smell. “Alcohol ferments and causes the odor of the urine to be like rotting greens,” Dr. Gupta says. Speaking of rotting greens…

It’s one of the universally acknowledged food truths, like how coffee makes you poop

and beans make you fart. You know eating asparagus makes your pee smell weird. There’s actually a scientific explanation, though; asparagus has asparagusic acid, which is responsible for the distinctive scent in your urine. It’s also a genetic thing — not everyone who eats asparagus pees out that funky stench, and not everyone can smell it, although it’s more common than not.

If you notice your pee is smelling really foul (not just strong, like when you’re a little dehydrated), it could be a sign of a urinary tract infection, says Dr. Mark Ellerkmann, director of urogynecology at the Weinberg Center for Women’s Health and Medicine in Baltimore. More bacteria get released into your urine during a UTI, causing a distinguished rank odor that he describes as a “pungent rotten-egg smell, often fishy-like.” Fun! If things just smell off, go see a doctor ASAP to make sure everything’s OK.

Pissing sugar may sound like an amusing Southern expression, but it could be a sign of diabetes. “Sweet-smelling urine typically indicates the presence of sugar or glucose,” Dr. Ellerkmann says. “Of course, having diabetes increases the chances of spilling glucose into the urine if blood glucose levels are too high.” And if you’re noticing you have to pee much more frequently, that could be another sign of diabetes. Go see your doctor right away.

You’re on a keto diet

Just like how going super low-carb makes your breath reek

, it can do the same to your pee. When you enter a state of ketosis, usually by purposely forgoing almost all carbs and going on a keto diet, your body releases ketones as it burns fat for fuel. This is great for weight loss, but not so great for your body odor. And if you’re a type 1 or type 2 diabetic who takes insulin, ketones could also affect your urine if your insulin levels are off, and there’s not enough glucose for your body to use, Dr. Ellerkmann explains.

is an inherited condition in which the body can’t break down certain amino acids properly, and creates a sweet smell in the urine. Dr. Ellerkmann has described it as smelling like maple syrup, burned sugar, or malt. It’s pretty rare, and since it’s genetic you’ll see it in infants and other young kids. If you’re a parent and your kid’s pee starts smelling extra syrupy, get it checked out, because untreated, it could lead to seizures, coma, and death.

The smell of rotting fish is hard to ignore, and should especially be a red flag if you notice it in your pee. If your toilet bowl smells like a fish market gone bad, it could betrimethylaminuria

(try saying that three times fast, or just one time, slow). It’s a metabolic disorder in which your body can’t break down trimethylamine, a compound that gets synthesized by bacteria in your gut when you eat foods high in choline and carnitine, like eggs and red meat.

If this sounds horrible, it is. This one’s also a rare genetic disorder, but for those afflicted, the odor can also impact breath and sweat, according to Dr. Ellerkmann, so it’s hard to get away from. It’s probably best to discuss with your doctor to see how best to manage it.

PKU, short for phenylketonuria, is another inherited disorder where the body can’t break down phenylalanine, an amino acid found in protein. “If PKU is untreated, or if foods containing phenylalanine are eaten, the breath, skin, ear wax, and urine may have a ‘mousy or ‘musty’ odor,” Dr. Ellerkmann says. This unpleasant smell is from the buildup of phenylalanine in the body, and if untreated, could lead to serious health complications such as intellectual disability, seizures, and brain damage. But don’t let this freak you out too much — PKU is usually diagnosed in infancy, so if you haven’t developed it yet, you’re probably good.

Sulfa is found in some diabetes medication, antibiotics, migraine medicine, anti-inflammatories, and (quite fittingly) diuretics. Although the correlation isn’t strong or that widely understood, Dr. Ellerkmann says taking a medication that contains sulfa might make your pee smell funky. If anything, it’s something to be aware of if you notice a change in pee smell with no other explanation.