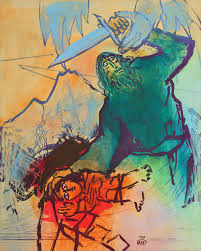 What if we’re making the wrong assumption about the “testing” happening in the story of the binding of Isaac (Gen 22:1-18)? Traditional interpretations often take this story to be about God’s call for Abraham to be willing to sacrifice his son. Different modes have been used to try to make sense of this: Maybe Isaac knew God would provide a different sacrifice; maybe it’s a (disturbing) lesson in priorities; maybe the authors – from their position writing at a later date and knowing the outcome – created or read into this story the extent of God’s involvement in order to convey themes of obedience and faithfulness to a people that was prone to wander.

These are positions that need to be wrestled with, but what if the interpretation hinges on the fifth word of this narrative. What if the “testing” isn’t about Abraham’s willingness to sacrifice Isaac, but is about his willingness to engage with God about what he knows to be right? What if Abraham’s responseisn’t the one God is looking for? What if Abraham is taking faithfulness to an ungodly conclusion?

The heroines and heroes of the Bible are frequently tested – it’s a literary tool just like the plots in our favorite epic adventure tales: ordinary people are called into overwhelming circumstances which they manage to conquer through reliance on a divine power.

Perhaps no tale comes to mind to better illustrate this point than the story of Job.  His character is cast as being righteous and good (Job 1:1). When calamity befalls him and he is tested, he continues to put his faith in God – but he doesn’t take it lying down. In fact, his push-back leads to a dramatic revelation of God’s character and power (Job 38-41). God is seen reminding Job of who God is, but not as rebuking Job for having complaints and questions in the first place. The authors put Job and God in dialogue, and without Job’s half of the conversation, we might not have had the opportunity to witness divine revelation.

Moses’ story has a similar effect. He pushes back against God’s call to lead the Israelites, and in the course of the back-and-forth, God reveals the core of God’s essence: God is I AM, being itself (Ex 3:14).

So at the very least God can definitely handle push back, and we could even make the argument that God encourages or rewards a healthy dialogue. A well-reasoned back-and-forth is exactly NOT what happens in the story of Abraham and Isaac. It’s clear from different parts of the story – and absolutely expected! – that Abraham doesn’t WANT to do what’s been asked, but he isn’t fighting back. It’s not because he’s afraid to fight back: he has argued with God in other instances, like when he questioned whether or not he and Sarah will have a child, or when he advocated on behalf of the cities of Sodom and Gomorrah (Gen 18:16-33).

Maybe God is expecting Abraham to continue in this vein, in which case we can only speculate about the outcome. Maybe God had another point to teach that would have been illustrated through a discussion with Abraham, maybe God was actually encouraging Abraham’s love and devotion to Isaac. Of course, these are all hypotheticals gleaned from reading between the lines. What we do know is that – regardless of if there was another, more ideal way this story could have played out – in the end God praises Abraham’s faithfulness.

Yes, God commends Abraham for not withholding Isaac, but this doesn’t mean God wasn’t surprised at Abraham’s compliance. It doesn’t mean this couldn’t have gone another way. As it is, Abraham complies with God’s literal request, and prepares to sacrifice Isaac. And here, as elsewhere, God make senses out of humanity’s mess.

In the creation story, God demonstrates provision by clothing and caring for humanity after they gain the knowledge of good and evil (Gen 3:20-22). God promises protection to Cain, even after rebuking and punishing him for killing Abel (Gen 4:15-16). God makes a covenant of blessing with Hagar and Ishmael, after Abraham and Sarah take matters into their own hands to produce an heir (Gen 16). In the binding of Isaac story, when Abraham is ready to take his faithfulness to disastrous ends, God steps in to calm the chaos and provide another sacrifice.

Following Abraham’s story, we will see God’s tendency to make order out of chaos again, many times over. When Israel is wandering in the desert, grumbling, God sends them guidance (Ex 13:21) and provisions of food (Ex 16). When things start to spiral a little too far out of control, God calls judges, prophets, and ultimately kings. When the Israelites are eventually exiled to captivity, God finds a way to draw order even into such desperate circumstances through characters like Daniel who remain faithful, or the remnant of Israel that helps Nehemiah rebuild the city of Jerusalem.

In fact, at just about every turn, God is creating order out of chaos. It’s a recurring theme in the Biblical narrative and – I would argue – an overarching theme throughout all of creation.

I think we can read Abraham’s “testing” as a call to engage with God in discerning dialogue when things don’t make sense or we feel too much is asked of us. But whether or not we behave this way, God continues to weave God’s spirit through our stories, leaving open the possibility for divine redemption – no matter what results our decisions lead to.

By: Alexis James Waggoner.  Alexis is a theologian and educator. She teaches at Belmont University and is the founder of The Acropolis Project (http://theacropolisproject.com), an organization dedicated to raising the bar of theological education in communities of faith. She also serves as a chaplain in the Air Force Reserves and is passionate about ministering to women in places where they are often marginalized. She has an M.Div from Union Theological Seminary in New York, a husband of 13 years, and a baby named Junia.

This article is courtesy of Women in Theology. https://womenintheology.org/

One thought on “The binding of Isaac and a call to argue.”